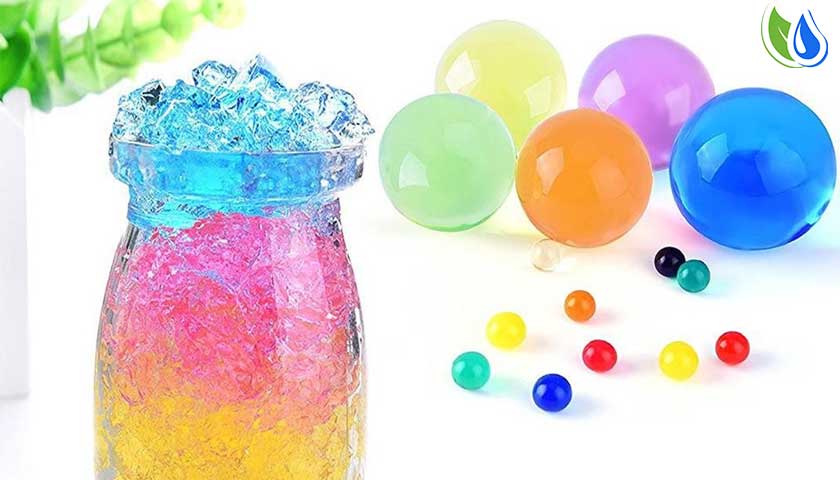 Water gel (plain)
Water crystal gel or water beads or gel beads is any gel which absorbs and contains a large amount of water. Water gel is usually in spherical form and composed of a water-absorbing superabsorbent polymer (SAP, also known as slush powder in dry form) such as a polyacrylamide (frequently Sodium polyacrylate).

Water gel is any gel which contains a large amount of water. Water gel is usually composed of a water-absorbing polymer such as a polyacrylamide (frequently Polymethylacrylate or Sodium Polyacrylate). Sometimes referred to as superabsorbent polymer (SAP) or, in dry form, as slush powder.A gel (from the lat. gelu-freezing, cold, ice or gelatus-frozen, immobile) is a solid, jelly-like material that can have properties ranging from soft and weak to hard and tough. Gels are defined as a substantially dilute cross-linked system, which exhibits no flow when in the steady-state. By weight, gels are mostly liquid, yet they behave like solids due to a three-dimensional cross-linked network within the liquid. It is the crosslinks within the fluid that give a gel its structure (hardness) and contribute to stickiness (tack). In this way gels are a dispersion of molecules of a liquid within a solid in which the solid is the continuous phase and the liquid is the discontinuous phase.

Water beads
Water beads are non-edible beads, made of a combination of water and a water-absorbing polymer. A polymer is made of tiny particles that stick together and form long chains. … When dry water beads are immersed in water, they fill up and expand like a sponge.

Water gels are used for:
– Supplying water to small animals as an alternative to supplying water in a dish. Some small animals tend to fall into dishes of water and drown.
– Watering or potting plants.
– Use in gardens to save water.
– Used as ammunition for gel blaster toy guns. Usually came in 7-8mm when full size.
– Colorful decorations or artificial snow.
– In a dry state as absorbent filler inside disposable diapers and sanitary napkins.
– In a dry state in large bags for controlling or containing floods.