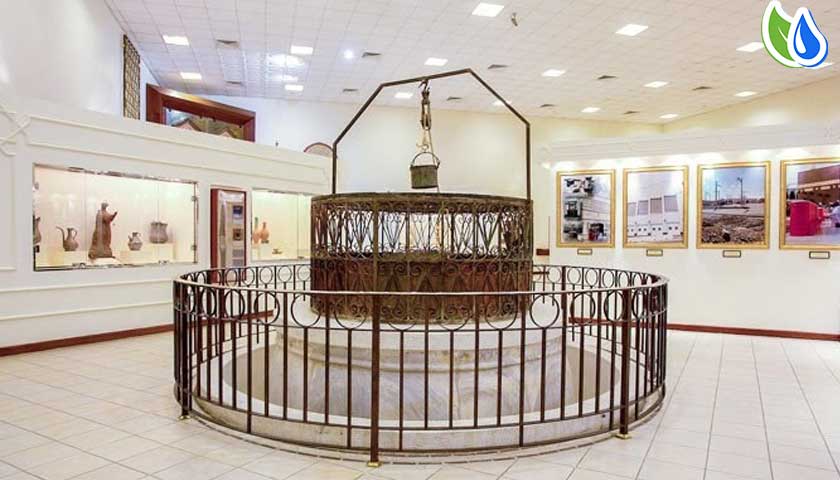 Zamzam Well
The Zamzam Well (Arabic: بِئْرُ زَمْزَمَ‎) is a well located within the Masjid al-Haram in Mecca, Saudi Arabia, 20 m (66 ft) east of the Kaaba, the holiest place in Islam. According to Islam, it is a miraculously generated source of water from God, which sprang spontaneously thousands of years ago when Ibrahim’s (Abraham’s) son ʾIsmaʿil (Ishmael) was left with his mother Hajar (Hagar) in the desert, thirsty and crying. Millions of pilgrims visit the well each year while performing the Hajj or Umrah pilgrimages in order to drink its water.

Traditional origin
Islamic tradition states that the Zamzam Well was revealed to Hajar, the second wife of Ibrahim and mother of Ismaʿil. By the instruction of God, Ibrahim left his wife and son at a spot in the desert and walked away. She was desperately seeking water for her infant son, but she could not find any, as Mecca is located in a hot dry valley with few sources of water. Hajar ran seven times back and forth in the scorching heat between the two hills of Safa and Marwah, looking for water. Getting thirstier by the second, the infant Isma’il scraped the land with his feet, where suddenly water sprang out. There are other versions of the story involving God sending his angel, Gabriel (Jibra’il), who kicked the ground with his heel (or wing), and the water rose.

The name of the well comes from the phrase Zomë Zomë, meaning “stop flowing”, a command repeated by Hajar during her attempt to contain the spring water. Alternative spellings include Zam Zam, Zam-Zam, Zemzem, Zem Zem, and Zem-zem.

According to Islamic tradition, Ibrahim rebuilt the Baitullah (“House of God”) near the site of the well, a building which had been originally constructed by Adam (Adem), and today is called the Kaaba, a building toward which Muslims around the world face in prayer, five times each day. The Zamzam Well is located approximately 20 m (66 ft) east of the Kaaba. In other Islamic tradition, Muhammad’s heart was extracted from his body, washed with the water of Zamzam, and then was restored in its original position, after which it was filled with faith and wisdom.

Technical information
The Zamzam well was excavated by hand, and is about 30 m (100 ft) deep and 1.08 to 2.66 m (3 ft 7 in to 8 ft 9 in) in diameter. It taps groundwater from the wadi alluvium and some from the bedrock. Originally water from the well was drawn via ropes and buckets, but today the well itself is in a basement room where it can be seen behind glass panels (visitors are not allowed to enter). Electric pumps draw the water, which is available throughout the Masjid al-Haram via water fountains and dispensing containers near the Tawaf area.

Hydrogeologically, the well is in the Wadi Ibrahim (Valley of Abraham). The upper half of the well is in the sandy alluvium of the valley, lined with stone masonry except for the top metre (3 ft) which has a concrete “collar”. The lower half is in the bedrock. Between the alluvium and the bedrock is a 1⁄2-metre (1 ft 8 in) section of permeable weathered rock, lined with stone, and it is this section that provides the main water entry into the well. Water in the well comes from absorbed rainfall in the Wadi Ibrahim, as well as run-off from the local hills. Since the area has become more and more settled, water from absorbed rainfall on the Wadi Ibrahim has decreased.

The Saudi Geological Survey has a “Zamzam Studies and Research Centre” which analyses the technical properties of the well in detail. Water levels were monitored by hydrograph, which in more recent times has changed to a digital monitoring system that tracks the water level, electric conductivity, pH, Eh, and temperature. All of this information is made continuously available via the Internet. Other wells throughout the valley have also been established, some with digital recorders, to monitor the response of the local aquifer system.

Zamzam water is colourless and odorless, but has a distinct taste, with a pH of 7.5–7.7, and so is slightly alkaline.

Possible health risks
The British Food Standards Agency has in the past issued warnings about water claiming to be from the Zamzam Well containing dangerous levels of arsenic; such sales have also been reported in the United Arab Emirates (UAE), where it is illegal to sell Zamzam water. The Saudi government has prohibited the commercial export of Zamzam water from the kingdom. In May 2011, a BBC London investigation stated that water taken from taps connected to the Zamzam Well contained high levels of nitrate, potentially harmful bacteria, and arsenic at levels three times the legal limit in the UK, the same levels found in illegal water purchased in the UK.

Later in that month the Council of British Hajjis stated that drinking Zamzam water was safe and disagreed with the BBC report. They also noted that the Government of Saudi Arabia does not allow the export of Zamzam water for resale. They also stated that it was unknown whether the water being sold in the UK was genuine, and that people should not buy it and should report the sellers to the Trading Standards if they saw it for sale.

The BBC’s statements have drawn mixed reactions from the Muslim community. Environmental health officer Yunes Ramadan Teinaz told the British broadcaster about commercially marketed Zamzam water that, “People see this water as a holy water. They find it difficult to accept that it is contaminated, but the authorities in Saudi Arabia or in the UK must take action.” The Saudi authorities have stated that water from the well was tested by the Group Laboratories of CARSO-LSEHL in Lyon, licensed by the French Ministry of Health for the testing of drinking water. According to reports of these results, the level of arsenic in Zamzam water taken at its source is much lower than the maximum amount permitted by the World Health Organization. The Saudi authorities have thus said that the water is fit for human consumption. Zuhair Nawab, president of the Saudi Geological Survey (SGS), has stated that the Zamzam Well is tested on a daily basis, in a process involving the taking of three samples from the well, and that these samples are examined in the King Abdullah Zamzam Water Distribution Center in Mecca, which is equipped with advanced facilities.

In 2018, a renovation project of the well was undertaken by the Saudi authority. The project involved sterilisation of the areas around Zamzam well by removing the debris of concrete and steel used in the old cellar of the Grand Mosque. During Ramadan 100 samples are tested every day to ensure that the water is in good quality.