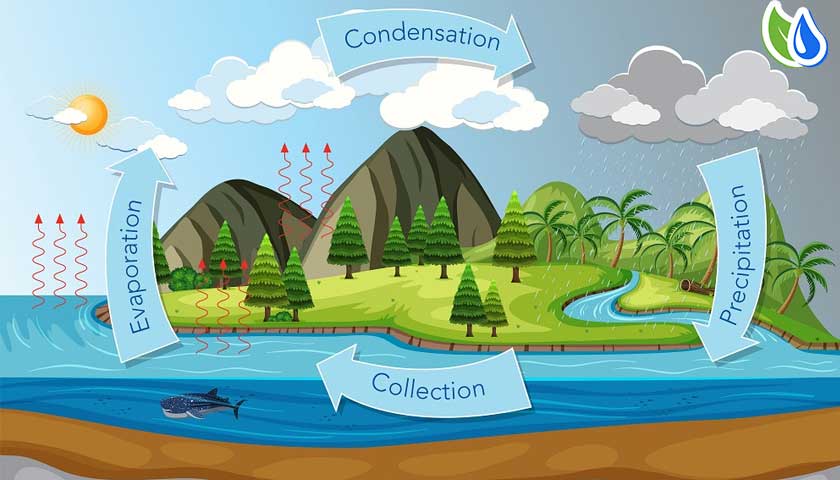 The water cycle
The water cycle (known scientifically as the hydrologic cycle) refers to the continuous exchange of water within the hydrosphere, between the atmosphere, soil water, surface water, groundwater, and plants.

Water moves perpetually through each of these regions in the water cycle consisting of the following transfer processes:
~ evaporation from oceans and other water bodies into the air and transpiration from land plants and animals into the air.
~ precipitation, from water vapor condensing from the air and falling to the earth or ocean.
~ runoff from the land usually reaching the sea.

Most water vapor over the oceans returns to the oceans, but winds carry water vapor over land at the same rate as runoff into the sea, about 47 Tt per year. Over land, evaporation and transpiration contribute another 72 Tt per year. Precipitation, at a rate of 119 Tt per year over land, has several forms: most commonly rain, snow, and hail, with some contribution from fog and dew.[58] Dew is small drops of water that are condensed when a high density of water vapor meets a cool surface. Dew usually forms in the morning when the temperature is the lowest, just before sunrise and when the temperature of the earth’s surface starts to increase.[59] Condensed water in the air may also refract sunlight to produce rainbows.

Water runoff often collects over watersheds flowing into rivers. A mathematical model used to simulate river or stream flow and calculate water quality parameters is a hydrological transport model. Some water is diverted to irrigation for agriculture. Rivers and seas offer opportunity for travel and commerce. Through erosion, runoff shapes the environment creating river valleys and deltas which provide rich soil and level ground for the establishment of population centers. A flood occurs when an area of land, usually low-lying, is covered with water. It is when a river overflows its banks or flood comes from the sea. A drought is an extended period of months or years when a region notes a deficiency in its water supply. This occurs when a region receives consistently below average precipitation.