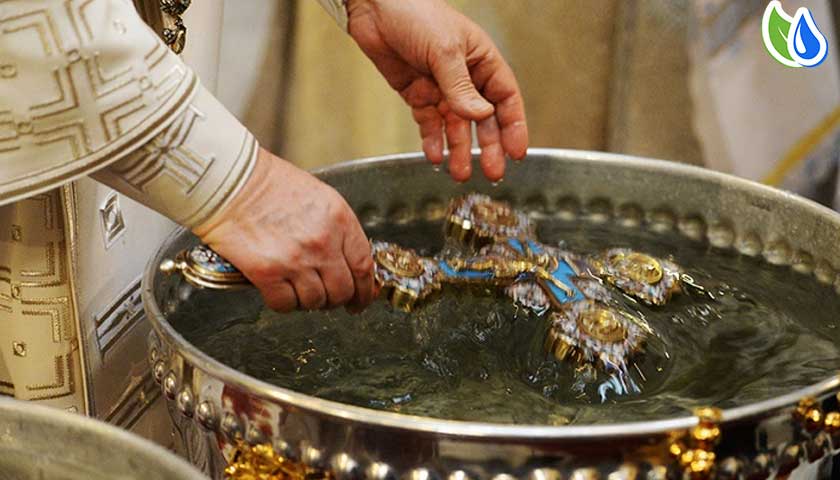 Holy water
Holy water is water that has been blessed by a member of the clergy or a religious figure. The use for cleansing prior to a baptism and spiritual cleansing is common in several religions, from Christianity to Sikhism. The use of holy water as a sacramental for protection against evil is common among Lutherans, Anglicans, Roman Catholics, and Eastern Christians.

Holy water In Christianity – History
In Catholicism, Lutheranism, Anglicanism, Eastern Orthodoxy, Oriental Orthodoxy and some other churches, holy water is water that has been sanctified by a priest for the purpose of baptism, the blessing of persons, places, and objects, or as a means of repelling evil.

The Apostolic Constitutions, which goes back to about the year 400, attribute the precept of using holy water to the Apostle Matthew. It is plausible that in earliest Christian times water was used for expiatory and purificatory purposes in a way analogous to its employment in Jewish Law.(“And he shall take holy water in an earthen vessel, and he shall cast a little earth of the pavement of the tabernacle into it”[Numbers 5:17]). Yet, in many cases, the water used for the sacrament of Baptism was flowing water, sea or river water, and it could not receive the same blessing as that contained in the baptisteries in the view of the Roman Catholic church. However, Eastern Orthodox do perform the same blessing, whether in a baptistery or an outdoor body of water.

Holy water In Sikhism
One of the holiest sites in Sikhism, Harmandir Sahib, is surrounded by a pool of water called amritsar or amritsarovar. For those who wish to take a dip in the pool, the Temple provides a half hexagonal shelter and holy steps to Har ki Pauri. Bathing in the pool is believed by many Sikhs to have restorative powers, purifying one’s karma. Some carry bottles of the pool water home particularly for sick friends and relatives. The pool is maintained by volunteers who perform kar seva (community service) by draining and desilting it periodically.

Sikhs use the Punjabi term amrita (ਅੰਮ੍ਰਿਤ) for the holy water used in the baptism ceremony known as Amrit Sanskar or Amrit Chhakhna.

Holy water In Hinduism
In Hinduism, water represents God in a spiritual sense which is the central theme in Mantra Pushpam from Taithreeya Aranyakam of Yajur Veda. Bathing in holy water is, thus, a key element in Hinduism, and the Ganges is considered the holiest Hindu river.

Holy water In Buddhism
The idea of “blessed water” is used in virtually all Buddhist traditions. In the Theravada tradition, water is put into a new pot and kept near a Paritrana ceremony, a blessing for protection. This “lustral water” can be created in a ceremony in which the burning and extinction of a candle above the water represents the elements of earth, fire, and air. This water is later given to the people to be kept in their home. Not only water but also oil and strings are blessed in this ceremony. Most Mahayana Buddhists typically recite sutras or various mantras (typically that of the bodhisattva Avalokitesvara for example) numerous times over the water, which is then either consumed or is used to bless homes afterwards. In Vajrayana Buddhism, a Bumpa, a ritual object, is one of the Ashtamangala, used for storing sacred water sometimes, symbolizing wisdom and long life.

Holy water In Islam
The Sunni Muslim variety of holy water is the Zamzam water that comes from a spring by The Kaaba.

The drinking of “healing water” (āb-i shifā) is a practice in various denominations of Shia Islam. In the tradition of the Twelver Shi’a, many dissolve the dust of sacred locations such as Karbala (khāk-i shifa) and Najaf and drink the water (āb-i shifā) as a cure for illness, both spiritual and physical.

The Ismaili tradition involves the practice of drinking water blessed by the Imam of the time. This water is taken in the name of the Imam and has a deep spiritual significance. This is evident from the names used to designate the water, including light (nūr) and ambrosia (amṛt, amī, amīras, amījal). This practice is recorded from the 13th and 14th centuries and continues to the present day. The ceremony is known as ghat-pat in South Asia.

Holy water In Other Religions
In Ancient Greek religion, holy water called chernips (Greek: χέρνιψ) was created when a torch from a religious shrine was extinguished in it. In Greek religion, purifying people and locations with water was part of the process of distinguishing the sacred from the profane.

The Book of Numbers mentions using water in a test for the purity of a wife accused of marital infidelity. Known as the Ordeal of the Bitter Water, the accused woman (sotah) would first be asked to confess to her crime before the court. If she refused to confess, she would then undergo the ritual. She would be stripped naked and then drink a mixture of water and dust. If she was guilty, the text is unclear on the exact punishment. If she was innocent, there would be no effect.

In Wicca and other ceremonial magic traditions, a bowl of salt is blessed and a small amount is stirred into a bowl of water that has been ritually purified. In some traditions of Wicca, this mixture of water and salt symbolizes the brine of the sea, which is regarded as the womb of the Goddess, and the source of all life on Earth. The mixture is consecrated and used in many religious ceremonies and magical rituals.

Holy water In Unofficial uses
Holy water has also been believed to ward off or act as a weapon against mythical evil creatures, such as vampires. In eastern Europe, one might sprinkle holy water onto the corpse of a suspected vampire in order to destroy it or render it inert. Thereafter, the concept proliferated into fiction about such creatures.