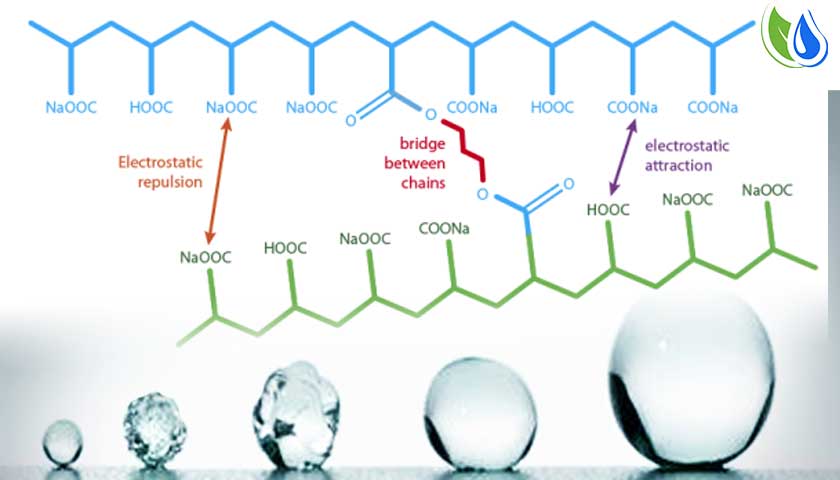 Water-absorbing polymers, which are classified as hydrogels when mixed, absorb aqueous solutions through hydrogen bonding with water molecules. A SAP’s ability to absorb water depends on the ionic concentration of the aqueous solution. In deionized and distilled water, a SAP may absorb 300 times its weight (from 30 to 60 times its own volume) and can become up to 99.9% liquid, but when put into a 0.9% saline solution, the absorbency drops to approximately 50 times its weight. The presence of valence cations in the solution impedes the polymer’s ability to bond with the water molecule.

The largest use of SAPs is found in personal disposable hygiene products, such as baby diapers, adult diapers and sanitary napkins. SAP was discontinued from use in tampons due to 1980s concern over a link with toxic shock syndrome. SAP is also used for blocking water penetration in underground power or communications cable, in self-healing concrete, horticultural water retention agents, control of spill and waste aqueous fluid, and artificial snow for motion picture and stage production. The first commercial use was in 1978 for use in feminine napkins in Japan and disposable bed liners for nursing home patients in the USA. Early applications in the US market were with small regional diaper manufacturers as well as Kimberly Clark.