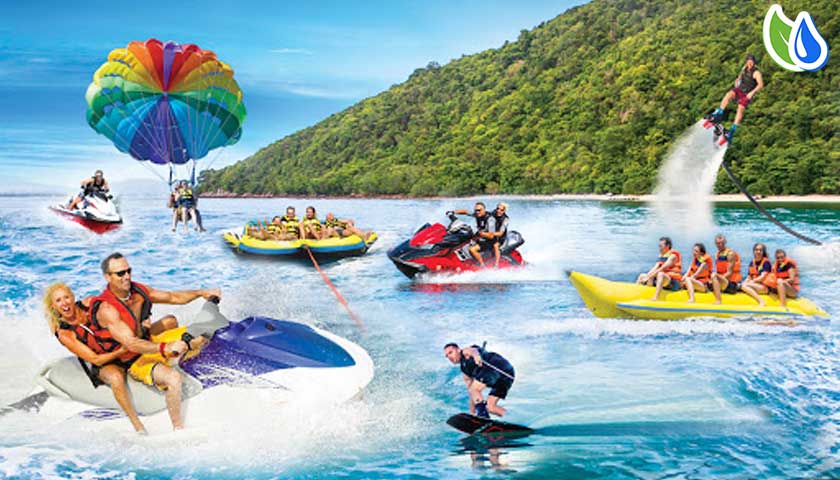 Water Sports
dictionary. various sports, such as swimming, water-skiing, or windsurfing, that take place in or on water

Most of water sports are adventurous, fun-filled, action packed, and exciting. Both, physical exertion and mental stimulation can be attained in water sports. It requires great physical strength, perseverance, determination, positive attitude, and a burning desire to excel.

In the water
Aquajogging, is a cross training and rehabilitation method using low impact resistance training. It is a way to train without impacting joints. Participants wear a flotation device and move in a running motion in the deep end of a pool. Equipment, aside from a pool, can include a flotation belt and weights.
Artistic or Synchronised swimming consists of swimmers performing a synchronised routine of elaborate moves in the water, accompanied by music.
Diving, the sport of jumping off springboards or platforms into water
Finswimming is a sport similar to traditional swimming using fins, monofin, snorkel and other specific devices
Modern pentathlon includes épée fencing, pistol shooting, swimming, a show jumping course on horseback, and cross country running
Rescue swimming is swimming with the goal to rescue other swimmers
Swimming, including pool swimming and open water swimming
Synchronized diving, Two divers form a team and perform dives simultaneously. The dives are identical.
Triathlon, a multi-sport event involving the completion of three continuous and sequential endurance events, usually a combination of swimming, cycling and running
Water aerobics is aerobics in the water.
Water basketball, mixes the rules of basketball and water polo, played in a swimming pool. Teams of five players each must shoot at the goal with a ball within a certain time after gaining possession.
Water polo is a sport of two teams played in water with a ball.
Water volleyball

On the water
Barefoot running, running on the beach without shoes
Boat racing, the use of powerboats to participate in races
Boating, the use of boats for personal recreation
Cable skiing, similar to wake boarding but with cables for artificial maneuvering
Canoe polo combines boating and ball handling skills with a contact team game, where tactics and positional play are as important as the speed and fitness of the individual athletes.
Canoeing is an activity which involves paddling a canoe with a single-bladed paddle. Most present-day canoeing is done as or as a part of a sport or recreational activity.
Dragon boat racing, teams of 20 paddlers racing the ancient dragon boat
Fishing, the recreation and sport of catching fish
Flyboard, a brand of hydroflighting device which supplies propulsion to drive the Flyboard into the air to perform a sport known as hydroflying.
Jet Skiing, performed with a recreational watercraft that the rider sits or stands on, rather than sits inside of, as in a boat.
Kayaking, the use of a kayak for moving across water
Kiteboating, the act of using a kite rig as a power source to propel a boat
Kneeboarding, an aquatic sport where the participant is towed on a buoyant, convex, and hydrodynamically shaped board at a planing speed, most often behind a motorboat.
Parasailing, where a person is towed behind a vehicle (usually a boat) while attached to a parachute
Picigin, a traditional Croatian ball game that is played on the beach. It is an amateur sport played in shallow water, consisting of players keeping a small ball from touching the water.
Rafting, recreational outdoor activities which use an inflatable raft to navigate a river or other body of water
River trekking, a combination of trekking and climbing and sometimes swimming along the river
Rowing, a sport that involves propelling a boat (racing shell) on water, using oars
Sailing, the practice of navigating a sail-powered craft on water, ice, or land
Sit-down hydrofoiling is riding on the water with a hydrofoil attached to a ski.
White water rafting, rafting on various classes of river rapids
Yachting, the use of recreational boats and ships called yachts, for racing or cruising

~ Underwater sports
Aquathlon (underwater wrestling)
Finswimming, some events are practiced completely underwater
Freediving
Snorkeling is the practice of swimming at the surface (typically of the sea) being equipped with a mask, fins, and a short tube called a snorkel.
Spearfishing
Sport diving (sport)
Underwater football
Underwater hockey is a game played underwater which has some similarities to hockey. Two teams of players use short wooden curved sticks to move a heavy puck across the pool bottom to the opponents’ goal.
Underwater ice hockey
Underwater orienteering
Underwater photography (sport)
Underwater rugby is a game played underwater which has some similarities to rugby football. Two teams try to score goals by sending a slightly negatively buoyant ball into the opponents’ goal placed on the bottom of the pool.
Underwater target shooting